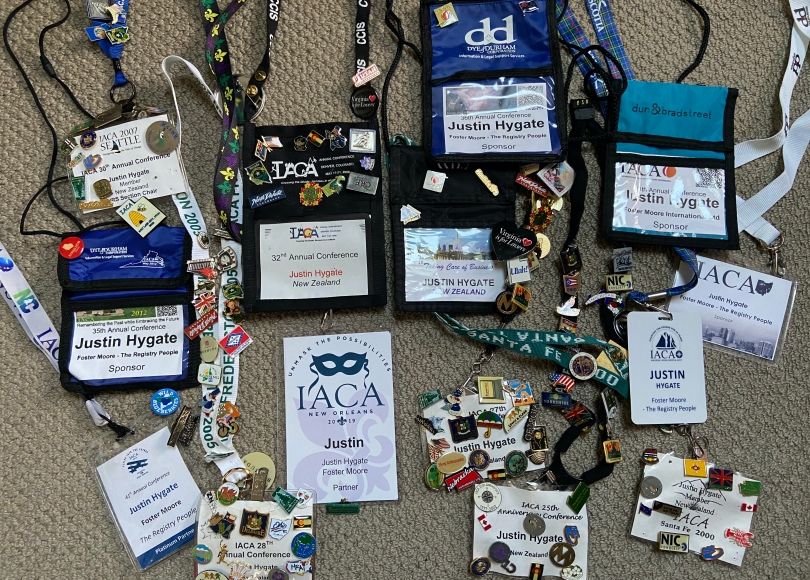 This Sunday I was to be in Indianapolis, Indiana at the opening event for the 43rd Conference of the International Association of Commercial Administrators (IACA).  Sadly the conference was cancelled due to Covid-19.

I have been thinking a bit about IACA and how it has been part of my life over the last 20 years.  I have attended 14 of their conferences since my first one in May 2000.  I have attended as both an International Member and since 2011, with my move to the private sector, as a Partner (sponsor).

For those not ‘in the know’, IACA is an association of the business registries for North America.

In 1999 in my former role as a public servant responsible for New Zealand’s business registries I researched information about this organisation and recommended to my manager that New Zealand attend.  I was more than a little miffed when said manager toddled off to the event (in Biloxi, Mississippi) himself without me.  He chose to take my colleague and good friend Michael Brosnahan instead so I can’t really complain.

In 2000 however it was my turn! I was able to participate in the conference in Santa Fe, New Mexico.  The trip also marked my first visit to the ‘mainland’ United States, Katherine and I had visited Hawaii some years before.  We had also walked across the Rainbow Bridge to a shopping mall in New York State at Niagara Falls come to think of it, but that hardly counts.

My trip to IACA in 2000 was highly memorable.  The conference was the biggest I’d ever been to where the topic was solely business registries.  The delegates were welcoming and great fun.  The evening social events were wonderful.  An arts and crafts museum, mariachi bands and, most memorable, a trip to J. W. Eave’s Movie Ranch where we got to experience a recreation of a town from the wild west.  The trip to the movie ranch involved a lengthy bus trip.  I sat next to Tim Poulin from Maine and a lifelong friendship resulted.  Such is the nature of IACA.  Enduring friendships are borne from the conference-week and are renewed each year.  It’s a lot easier now, thanks to social media, to stay in touch.  In the early days it was very much a case of catching up  with a years worth of news at the next conference.

I travelled from IACA to stay with my sister and her family in San Jose.  I went straight to the airport from the hospitality suite as I recall.

I missed the 2001 event in Victoria, British Colombia but rejoined the adventure in Ogunquit Maine in 2002. Ya Can’t Get Theya From Heeya!

For various reasons I didn’t attend those in between.  I was involved in the launch of a new IT system one year (2010), sent some staff one year (2003) in the hope that attending a conference for a week would allow them to sort their squabbles out (it did) and left the world of registries for a year (2014).   The other absences were due to me sending a staff member or not having budget approval.

I met Dick Shaw, the then Director General of Corporations Canada, at the conference in Maine in 2002.  We’ve been friends ever since and I was lucky enough to have a coffee with him in Ottawa this January.  Dick is retired these days but we’ve attended a number of conferences together over the years.

Each conference has been memorable in terms of the people I’ve met, places I’ve seen and laughs I’ve had.  And there have been so many laughs.

At my first conference in 2000 the “Hospitality Suite” was a poolside cabana at the Santa Fe Hilton.  We stayed up late chatting and laughing and I observed the IACA tradition of throwing some poor sod in a pool (not me thankfully).  I was sporting a Hugh Heffner’esque Hilton Bathrobe at some point however.

When I worked for government I used to enjoy singing a little tune as part of my contribution to “Roll Call”.  Each State or Province had a rich set of local tunes from which to choose and modify for registry purposes…

It’s my participation in the IACA conferences in 2000 and 2002  that became the impetus for the idea for the Corporate Registers Forum (CRF).   By its nature and charter IACA is first and foremost a United States and Canadian organisation.  I had the privilege of serving as the Chair of the International Section of IACA for a period and alongside Julian Lamb was able to increase the international participation year after year.  I saw the benefits of a global community of registries and was able to influence the formation of another more internationally focused organisation. In 2003 my team and I hosted an event in Auckland that has was the embryo of the CRF, which has gone on to be force for good in the registry world.

A lot has changed with IACA over the years.  In the early days I would lug all the conference binders and ‘tat’ home to New Zealand and store it reverently in my office. The IACA member directory was the size of a small telephone book alone.  There was a tradition of exchanging ‘pins’ with other delegates.  The pins would depict a State or Provincial logo of some form.  Robert Lindsay always had a large supply of fancy ones with flashing lights on them, these were always highly sought after.  Kathy Berg never failed to promote her State of Utah with a wonderful selection of pins either.   These days (and thanks in a small part to my contribution) IACA have a shiny and comprehensive website to hold all of this information (well not the badges sadly).

And then there was the Thursday night ‘Black Tie’ gala.  We would all arrange tuxedos and fancy dresses and enjoy a multi-course extravaganza.  I think I may have offended the legendary Jerry Daniels one year by adding a Krispy Kreme hat to my ensemble.  But I did get a few tips from my table service that night.

I shall miss attending the event this week.  I had been looking forward to it. Both the conference itself and reuniting with so many registry friends.

I note that I am connected to no fewer than 55 current or former IACA attendees on Facebook alone.

I feel for the current IACA President, Becca Longfellow, and her fellow IACA Board members and staff.  There is a lot of work that goes into planning the IACA event. These are people who have significant day jobs and who make time to prepare and plan the event in their State or Province.  Becca’s communications have been warm and pragmatic and no one could have anticipated the impact of the pandemic we are all now experiencing.  It was clearly the right thing to do.

I will be forever grateful to the IACA community for the kindnesses they have shown me and the camaraderie we’ve enjoyed over the last 20 years.

I am hopeful that the event might proceed in May 2021. It’s hard to know what the world or international travel might look like by then. Some are predicting it will be longer than that for international travel at least.  It may be that the IACA community shrinks to its US and Canadian members for a brief period.  Either way I wish all of my IACA buddies the very best of health and happiness at this time.  I hope, like me, they spend some time this week reflecting on the wonderful community that IACA is and of the great fun we’ve all had over the years.