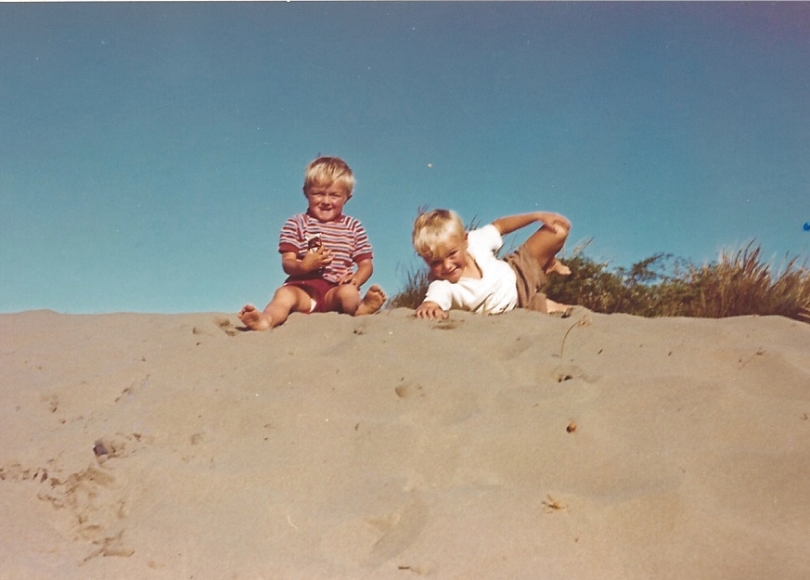 I have very happy and strong memories of my childhood Christmas’s.  I put this down in the main to the routines or traditions that we observed in my family.   Christmas eve consisted of watching (normally) a movie on the tele while waiting for midnight Mass.  We would then head of to Mass for carol singing and the service.  I cannot recall at what age I attended midnight Mass but it was always an exciting and enjoyable part of the event.  After Mass we would return home and usually receive a visit from Barbara and David Charles, friends of my parents.  There would be mince pies and a wee night cap for the adults.

We would bundle off to bed in anticipation of a visit from Father Christmas.  It was the tradition in our house to leave out a nylon stocking into which Santa would deposit his booty.  I recall one year I discovered the Santa was in fact my Aunt Angela!  It was that same year that I overheard her arrival (from Auckland) to our house.  She was telling my mother that she had just been to Jerusalem.  I wondered at this (as I knew Jerusalem was a long way off), she had in fact been up the Whanganui River to the mission station once the home of James K Baxter.

Christmas morning would be a forage through the nylon stocking full of surprises.  Normally there would be fruit (an orange) lollies, stickers and then a matchbox car, coloured pencils or the like.

This little lot would need to keep us occupied for the morning because the tradition in our house was that no presents would be opened until after lunch.  The Christmas Tree would be planted in a garden of brightly wrapped packages.  Being one of seven children meant that there was a small mountain of gifts at the foot of the tree each year.  Very tempting but definitely out of bounds until after lunch.  The morning was spent trying to be good and trying to find things to do that did not get under the feet of the adults in the kitchen.

Christmas lunch was a large event. The best crockery and cutlery were extracted from where ever it was they lived for the rest of the year.  A full roast was usually the menu followed by pavlova and/or trifle.

After lunch saw the ‘ladies’ (usually Mum, Angela and in later years presumably Terri) retire to the lounge while the men folk – Dad and his sons were on dishes duty.  Bearing in mind we are talking pre-dish washer era.

After this marathon of dishes which saw the sink emptied and water replaced numerous times, we got (finally!) to go through to the lounge and the pile of presents.

Presents were distributed by the youngest and passed to the oldest and then the next oldest and so on.  Every one watched while a gift was unwrapped and acknowledged before the next person received theirs.

Once the lounge was converted to a pile of gifts and and even larger pile of paper we then pottered about for a bit.

The balance of the afternoon was taken up with a trip to the Charles household, we were only allowed to take one of our gifts  to play with.

The evening was then spent watching whatever Christmas special was on the tele while eating lovely fresh ham sandwiches.

And that was the Christmas of my childhood…