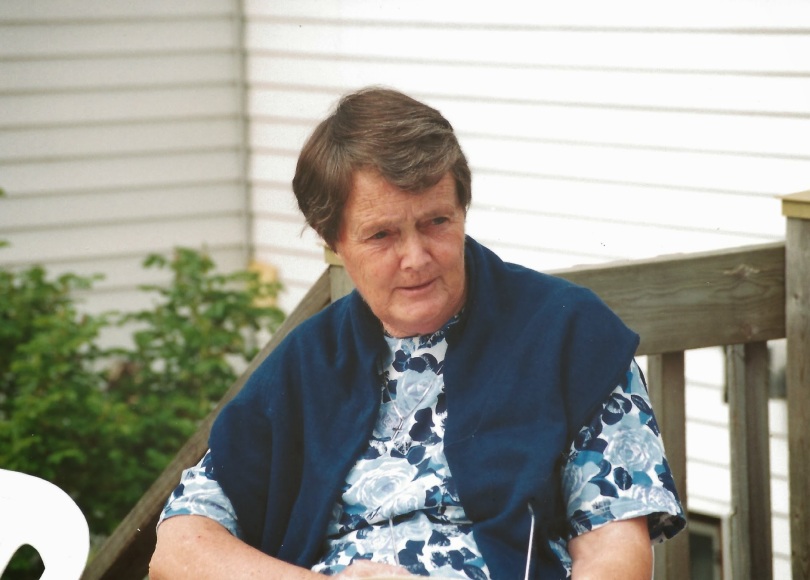 According to her death certificate she died from an acute myocardial rupture five hours after an acute inferior st elevation myocardial infarction. I understand that to mean a rupture of the heart after a heart attack. Along with my sister Victoria and brother Stephen, I was with mum when she died. It was a rather surreal day.

I record the events of the week and the day mum died partly for the benefit of others but also for me personally. Many will be aware that an earthquake struck Christchurch at 04:30 on the morning of 4 September. It was a large one measuring magnitude 7.1, larger than that which hit Haiti in January. The quake was very frightening and, for those of us living one block from the Pacific Ocean, was followed very quickly by a drive up the nearest hill in case of a tsunami.

The girls coped very well and we were not truly aware of the damage to our city until the daylight came. We have had over 2500 aftershocks. One on Wednesday 8th was a magnitude 5.1 and did a lot of damage in its own right. Miraculously and in part due to building codes and the time of the quake nobody died or was seriously injured. On the Wednesday morning after several very sleepless and anxious nights where it was not unusual to have three or four significant aftershocks I had made the decision to close my office and to send staff home until Monday 13th. I was working with a skeleton staff supporting the Minister who had relocated from Wellington to my office to manage the government’s response to the damage.

I had been in contact with mum by phone and text on numerous occasions each day since the quake. She was very cheerful and pragmatic about the whole thing. Her decreased mobility meant that she tended to ‘ride out’ the quakes in bed rather then seek shelter under doorframes or tables like the rest of us. In typical mum fashion she mentioned that if you can survive a war then an earthquake is entirely manageable. On Thursday the 9th at about 2:00 pm I popped into to see her at Maryville, in part to sign some cheques for her (her stroke had meant that her signature was a bit wobbly so I was looking after her finances with her) and in part for a good natter about the earthquake.

Mum was in great spirits and we had a cup of tea and a good catch up. I said farewell and promised to come back on the Saturday to take her out for a drive and show her some of the earthquake damage. On my way out of the Retirement Village I stopped in at the office and spoke to the resident manager and nurse, we all chatted about the earthquake and how the ‘inmates’ (as I referred to them) were bearing up. I then headed back to work. I had been back at my desk for no more than 10 minutes when my phone rang, it was Jill the nurse from Maryville. She told me that mum had rung her to ask her to telephone for an ambulance as she was having a heart attack.

I couldn’t really believe it. I texted Victoria who was off work as all the schools in Christchurch were also closed until the 13th as a result of the quake. We both headed off to Accident and Emergency (A&E). It was a place I was all too familiar with over the last 10 months, mum having been there at least 5 times since December 2009. We arrived at A&E and found mum sitting up talking to the medical staff. She complained a little of chest pain and they gave her some morphine. Her doctor talked to us about the options he was considering and while he was consulting notes and so on we chatted to mum. Mum, as was her pattern, apologized profusely to any and all for being such a nuisance and was annoyed to be back in hospital again. The doctor returned and announced that he had decided that surgery was the plan and requested that the nurses give mum aspirin and a range of pre-surgery meds.

Mum started to take these and was chatting away (albeit a little more quietly than normal) to the nursing staff. I noticed mum go a very funny colour and was pointing this out to Victoria when mum collapsed back on her bed. We were told (read forcefully) to get out while the call for additional medical staff went out. We waited anxiously outside the curtains while the medical team defibrillated mum. It was very much the cliché event seen in movies with people calling ‘clear’ and so on. I thought we had lost her there and then. It was with some emotion then that I heard the doctor chatting to mum and ‘welcoming her back’. Mum was again chatting and conscious. We then had a very fast run (mum in her bed) to the operating theatre. Mum underwent a procedure that cleared a blockage in one of the two stents she had had inserted in 2008. By this time I had summonsed Steve and he, Vic and I waited for mum to come out of surgery. At about 6 o’clock the doctor came to find us and advised that the surgery had gone well. He told us that mum would be groggy and it would be too soon to understand what damage had been done to her heart by the heart attack.

We were able to see mum who was resting in her bed. She told us all to go home and apologized for getting us into hospital again. We told her it was all part of the service, kissed her goodnight and reminded her that we loved her. I spoke to the ward nurse and asked what time visiting hours were in the morning. We then all went off home. I remember driving home marveling at mum’s resilience yet again.

I got home about 7:30pm and was reading Katie her bedtime stories when my phone rang, it was Victoria saying that the hospital had rung and were requesting that we return as mum had taken a turn for the worse. After a frustratingly slow drive back into the city I walked into the same waiting room I had left a few hours before. There were two very solemn (in fact devastated looking) doctors. They informed us that mum’s heart had ruptured and that she was dying.

Mum was unconscious, and due to the interventions that had been attempted to stem the bleeding mum was not breathing by herself but was being assisted. In a younger person they might attempt open-heart surgery but given mum’s recent medical history it was not something they would recommend. Mum had reminded me on numerous occasions that she did not wish to be revived and I was able to convey to the doctors that mum would not wish to go through any more trauma. We were taken to be with mum, who was in a private room at the end of the ward. Steve, Vic and I along with the wonderful nurse (whose name I cannot remember) then stayed with mum.

I asked for the hospital chaplain Father Kevin Wei to be called and he arrived in an amazingly short time. He anointed mum and prayed with us. As he was leaving he said he would check in on mum in the morning, such was everyone who knew mum’s experience of her bouncing back from her medical adventures. I had to point out on this occasion that mum would not be there in the morning and that she was dying, he looked genuinely upset. I note that among the papers I have of mum’s she attended his ordination about 10 years ago.

We asked the nurse to remove some of the medical apparatus and then spent about 10 minutes being with mum as she passed gently from us. She was not in any pain and was very peaceful. It was a real privilege to be with mum as she died, there is something very humbling about being with the person who bought me into the world as she goes from it.

At the same time it was a very surreal event, only seven or so hours earlier I had been having a laugh and a good old cup of tea with mum. The next few days were filled with the reality of funeral arrangements, the logistics of collecting family from airports and trying to find time to make sense of it all. Angela (mum’s younger sister, based in Auckland) was simply outstanding. She and mum were obviously very close over the years but Angela’s generosity and care for mum since the stroke has been overwhelming. She was so very upset at mum’s death and I do feel for her. Angela has always played a very solid part in our childhoods and lives being in New Zealand so we shall ensure she too is looked after.

Each of my siblings contributed to mum’s funeral in their own way. It was a much repeated statement that mum would have loved to have been there with all her children and grandchildren in the same place at the same time, a very rare event indeed (in fact one that last occurred for dad’s funeral, although there are a four more grandchildren since then).

I now have all of mum’s ‘things’ in my garage at home as the earthquake damaged the presbytery at Maryville and the trust managing the complex asked whether we would mind vacating early in order to house the Parish Priest. We all thought that mum would have been only too happy to do so and so we (organized by Angela) cleared out early. It does however mean that I have the sole task, being one of the only ones in Christchurch, of sorting through it all.

While mum had a very little house and more recently a little unit at Maryville she managed to keep a lot of ‘stuff’ in it. It was interesting to know that mum kept a lot of correspondence from family, Christmas cards, Easter cards, postcards from family travels along with invitations to weddings, photos of nieces and nephews and great nieces and nephews. Family and contact with friends were huge components of mum’s life.

Mum coped very well in the 14 years since we lost dad. She was by nature a very independent person. Her faith was contagious and her love of the Church simply at the core of her being. She was a super grandma and Annie (14), Molly (11) and Katie (4) were heartbroken to loose her.

I loved her fiercely and was very much a mummies boy from day one (in part due to my own poor health as a bairn I suspect). I was lucky to come to know dad in a very special way through his long illness and as new grief builds on old, I am truly feeling orphaned before my time. I shall cherish the wonderful childhood they gifted me, we were loved, supported, encouraged and accepted as kids. Their decision to immigrate to New Zealand though hard for them early on was simply the best thing they could have ever done for us. We live in a wonderful country, young, beautiful, full of hope and with a small population.

Rest in peace mum and dad.