Sixteen years ago on 5 October my dad died. I was 30 and he 64. I was rather fond of the chap and I mourn his absence from my life frequently. 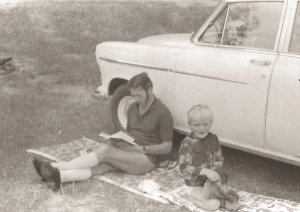 I was always proud of my dad.

Dad was a bloody good bloke. He had a great sense of humour and a great general knowledge. He was interested in stuff and was able to describe things in a way that assisted understanding.

He traveled in his days in the Royal Navy, he lived in the UK, New Zealand and Papua New Guinea. He worked in interesting roles and was a great role model for his children (all seven of us).

He could be a moody bugger (another gift I inherited) but quick to get over it and preferred to just get on.
I often find myself wondering what dad would think of some new thing I see or read.

He had a great many sayings one of which was to respond, when asked how he was feeling (particularly in the latter stages of his cancer), “far too early to tell”.

I hope that I have some of his qualities. I hope one day my kids will look back on me as I do on my dad, with a deep fondness and gratitude.

One of my favourite musicians, Luka Bloom, has a song called The Man is Alive. The lyrics include the lines

I reckon I have some of Jack Hygate in me and I’m very happy that it’s the case.

There’s some of his writings and more photos over at http://www.jackhygate.com