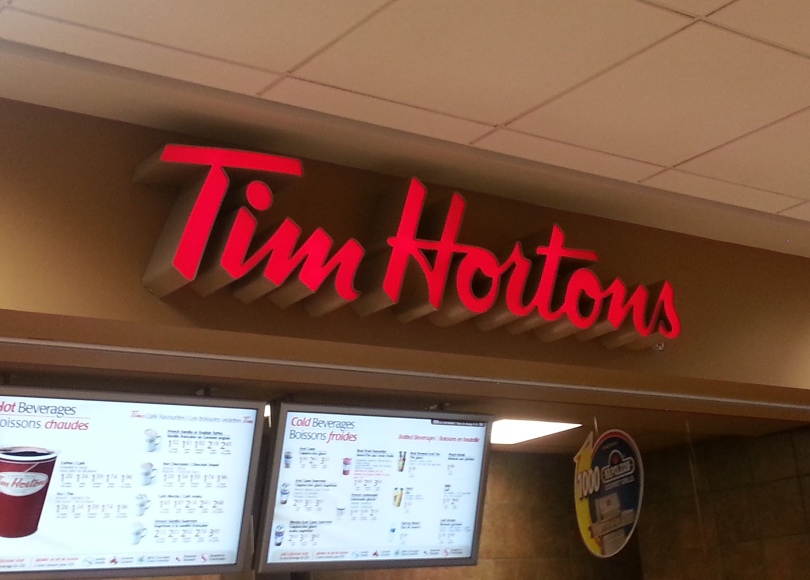 Katherine and I set off on our delayed big OE (overseas experience) in 1993. We travelled to North America, Europe and Asia. We started the trip with a week in Honolulu and then headed up to Canada. This first visit to Canada saw us land in British Columbia and travel East to Ontario by rail, stopping in Alberta and Manitoba en route. We arrived at Toronto Union Station and were met by my Aunty Kate and Uncle Jimmy. We stayed with them in Ajax, Ontario for several weeks.

On our first Sunday in Ajax we joined Kate and Jimmy for church. After the service we were taken, as part I believe of their regular routine, to Tim Horton’s for a coffee and a donut… and so began my obsession.

Tim Hortons  is a Canadian fast casual restaurant known for its coffee and donuts. 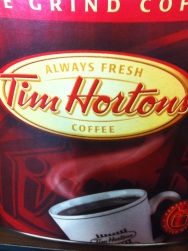 In 2001 I won a study award from the New Zealand Government and had the opportunity to visit any business school of my choice. I was very keen to return to Canada and so selected Queen’s School of Business in Kingston, Ontario. The business school was excellent and had in fact been ranked as having the best food of any business school in a survey that year. While the food was good it wasn’t so good as to stop me wandering off each evening to the nearby Tim Horton’s.

I visited Ottawa in 2003 as part of a visit to the Federal Companies Register and prior to the IACA Conference in Fredericton, New Brunswick. My dear friend Dick Shaw ensured that the hotel my colleague and I stayed in had a Tim Horton’s in the basement. We travelled to New Brunswick by car and enjoyed several Tim Horton’s roadside experiences along the way.

Dick and his wonderful personal assistant Louise would send me a Tim Horton’s calendar every year and it would take pride of place in my office.

When Dick and I attended the Corporate Registers Forum conference in Cape Town in 2009 Tim Horton’s were having their annual Roll-up-the-rim to win promotion. Dick had bought a Tim Horton’s cup for each morning and I was able to play from South Africa.

Myron Pawlowsky and I snuck off from the CRF in Fredericton for breakfasts of bagels at Tim Horton’s on a few occasions.

There was a Tim’s in Fredericton pretty much attached to a Catholic Church. I found this rather amusing, seeing two ‘religions’ so close.

Now many will know that I am a bit of a coffee snob and it will therefore come as a surprise at this point to learn that I don’t actually like Tim Horton’s coffee. It is not the coffee that we drink in New Zealand at all. I have never uttered the words, Double Double.

When I visit a Timmie’s I drink a small French Vanilla. It has become for me ‘the taste of Canada’. Every time I have one it evokes my fondness for the country and seems to contain the entire (growing) collection of my memories of great times spent there.

I do love donuts. Shamelessly. There was a time in my history where I would have happily sat in a Tim Horton’s and ‘done the menu’. In my more recent wisdom I limit myself to the occasional Canadian Maple.

I took a nine-hour car ride to Vermont from Toronto a few years back and limited myself to a humble dozen Timbits. Quite controlled of me. 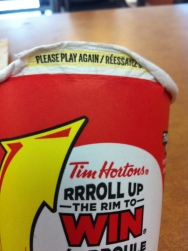 I have a collection of Tim Horton’s mugs, coffee canisters, Christmas Tree ornaments and most recently was given a ‘rim roller’ for those times I manage to coordinate travel with the roll-up-the –rim promotion.

The place is pure franchise. Consistent, bland, formulaic. The staff uniform is beige. But it is warm, friendly and remarkably inexpensive. And absolutely ubiquitous in Canada. According to Wikipedia there are in excess of 4500 stores across Canada. I’ve barely scratched the surface. I’ve been to a Tim’s in at least 8 of the 9 Provinces I’ve visited.

My recent visit to Regina in -28 (wind chill -42) degree temperatures proved the value of Tim Horton’s soups. I’ve found comfort in a Sour Cream Glazed at many an airport terminal.

The whole story of Tim Horton and the company he started is also kind of fascinating and would make a good movie (it would need an intermission of course so one could stock up on Dutchies).